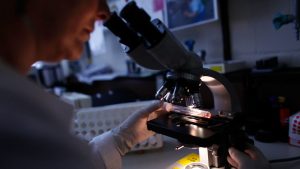 August 11, 2016 – From STAT – Reporting from the frontiers of health and medicine

Precision medicine aims to be a transformative paradigm that moves away from the “one-size-fits-all” approach in which treatments work for some people but not others. To the average American, especially one who has cancer, precision medicine sets a high expectation of a more targeted, and so more effective, treatment.

But all too often the science underpinning these targeted therapies has not been up to snuff and the result has been greater uncertainty about optimal treatment — just the opposite of what precision medicine intends to do.

As we wrote recently in Science, three key barriers are impeding the drive toward truly transformational precision medicine: researchers often don’t rigorously test the biological theories that supposedly explain why a targeted treatment should work; they haven’t fully determined the accuracy of the diagnostic tests used to figure out if a patient is a good candidate for the therapy; and there’s little coordination between investigators, which has led to inefficient research.

Biological theory matters. In the past, researchers didn’t need to know precisely how a drug worked as long as it improved health or saved lives. For example, the statin class of drugs were originally thought to prevent heart attacks by lowering the amount of harmful LDL cholesterol in the bloodstream, but may actually achieve their cardioprotective effect by cooling inflammation.

Precision medicine is supposed to work differently. Basic research identifies a gene or protein thought to be at the root of a particular disease or condition. A drug is developed to modify the gene’s products or block the protein’s action. A diagnostic test is created to determine who carries the gene or who has an abnormal protein level, and so who should get the drug.

All of these steps are built upon the assumptions of biological theories which, unfortunately, can be wrong or incomplete.

An example of this is cetuximab (Erbitux). Developed as a precision medicine against metastatic colorectal cancer, the FDA initially approved cetuximab in 2004 for patients whose tumors tested positive for a protein called EGFR. However, the pivotal clinical trial that led to FDA approval didn’t enroll any EGFR-negative patients. That’s a problem because it made it impossible to test the key biological assumption that cetuximab would not benefit EGFR-negative patients. Researchers later discovered that EGFR production is basically irrelevant to whether patients with metastatic colorectal cancer will benefit from cetuximab. Instead, another genetic marker, a mutation of a gene called KRAS, better predicts who will benefit from the drug.

Because the biological connection between the abnormal gene or protein, the cancer, and the diagnostic tool wasn’t carefully tested before cetuximab was approved, some patients who would have benefitted from the drug didn’t get it, while others did get the drug — and its harmful side-effects — even though they had essentially no chance of benefitting from it. This is exactly what precision medicine is supposed to avoid.

Managing uncertainty. In conventional disease research, a group of individuals take a drug believed to treat a particular condition. The outcome is whether they get better. In precision medicine there are additional things to consider. What gene, protein, or other biomarker is involved? What diagnostic test is used to identify it? What drug is best for treating individuals with the biomarker? Uncertainty with any of these questions muddies treatment decisions.

One of the best known biomarkers, HER2, is a receptor protein that sits on the surface of breast cancer cells. The more HER2, the more “grow and divide” signals are sent to the cancer cells. Drugs such as trastuzumab (Herceptin) and lapatinib (Tykerb) directly target HER2. The basic test for HER2 measures the amount of the protein on cell surfaces. A score of 0 to 1+ is typically classified as HER2 negative, 2+ is borderline, and 3+ is HER2 positive. However, different labs and different pathologists use slightly different rules for deciding whether test results are positive or negative. That means some women who would benefit from taking anti-HER2 drugs aren’t getting them while others who are HER2 negative are getting them. After tons of studies, we still don’t know the exact cutoff score for treatment with anti-HER2 drugs.

Wild West. When a variety of different research teams, labs, and companies are working in the same area, it is often difficult to know if the results they generate are comparable, since no one is ultimately responsible for double-checking results or coordinating this enterprise.

One example of this involves a treatment for lung cancer. Numerous teams are looking at more precisely targeting chemotherapy for lung cancer using a biomarker called excision repair cross-complementation group 1 (ERCC1) protein. In theory, the chemotherapy drugs cisplatin and carboplatin work better for individuals whose tumors have less ERCC1 protein. In reality, it’s more complicated — and more discouraging — than that.

An evaluation of 33 studies of ERCC1 and lung cancer chemotherapy showed so much heterogeneity in the diagnostic methods and scoring rules that the results are essentially incomparable. So after more than a decade of research, we still don’t know if measuring ERCC1 makes a difference. Nevertheless, numerous ERCC1 test kits are commercially available, and are being used to help “guide” lung cancer chemotherapy.

Ways forward. The goal of precision medicine is admirable. But it will take longer to get there and cost far more than anticipated given the current research inefficiencies. Multiple research groups are exploring the same targets with little communication and oversight. Instead of leading to better, more reliable biomarker assays and treatments, these uncoordinated efforts can sow confusion and undermine interventions intended to enhance patients’ health.

It doesn’t have to be this way. We should demand the same high-quality testing of precision medicine as we do for any new medicine, including randomized trials that account for the presumed mechanism of action. In addition, a central, up-to-date, publicly accessible database of evidence regarding biomarkers and diagnostic tests — perhaps coordinated by major research institutions such as the National Human Genome Research Institute and National Cancer Institute — would help improve transparency and reduce waste and inefficiency in the quest for precision medicine.